Since mid-2017 we had to keep a secret to ourselves:

Consor Universal plays a role in the Swiss movie “Wolkenbruch”! The film was released in Switzerland last week and is showing in cinemas now.

The comedy by Michael Steiner is based on the bestseller by Thomas Meyer; it is about a young Jew from Zurich who breaks with his orthodox family for love’s sake.

So, what does that have to do with Consor Universal? 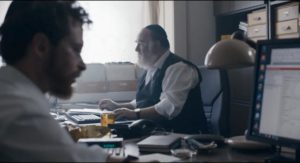 The movie features a scene in which an insurance claim is processed. In the scene, the clerk uses Consor Universal to record and handle the claim.

When the producers contacted us last summer to ask if they could use our application in the film, we jumped at the opportunity. Despite our busy schedule, we were excited to support the project and develop a prototype especially for use in the film. We were most impressed by the art director’s attention to detail – being software specialists, we will regularly pause movies when a computer screen appears and, in most cases, what is shown has no relation to the scene at all. Definitely not the case in Wokenbruch! Also, having worked and/or lived there, a bunch of us are great fans of Wiedikon, where a lot of the movie was filmed.

Remains to say that we’re all looking forward to going to watch the film together this week and having a good time together.

For more information about the film Wolkenbruch please click here.

For more information on how Universal can help your underwriters with their daily tasks, please contact Consor.

Insurance companies in German-speaking countries are discovering the topic of robotics for themselves. The technology…

Living Sustainability in the Company – Vol. 3