Everything is new in May. From early summer 2018 Consor Universal will be presented in a new look – i.e. with a new user interface.

As already announced at the Consor Universal User Conference 2017, Consor Universal will be equipped with a new user interface starting with version 7.0. The revised design will initially be available for the Underwriter Platform (HTML). 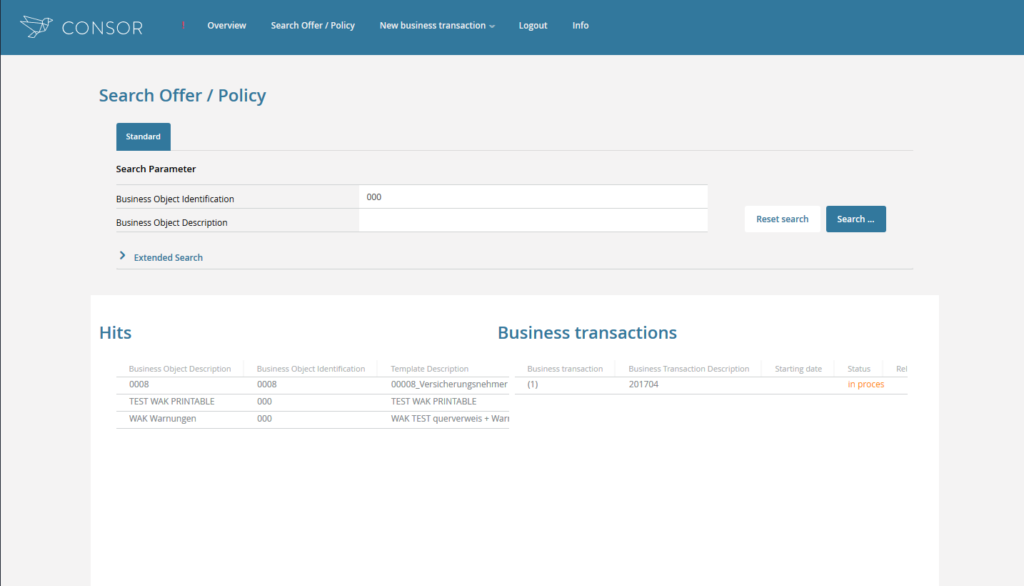 The new interface was developed in cooperation with dreipol. dreipol is a specialized agency for interaction design and has incorporated its experience in terms of user-friendliness into the modern and light-looking design of the Universal interface. However, the operation of Consor Universal has remained basically the same. Users will also find their way around the new interface immediately.

The update was implemented with a new architecture concept based on the open source framework Vaadin. Vaadin allows you to easily implement appealing user interfaces in Java. With the modern GUI framework Vaadin, Consor Universal once again has an interface that is technologically state-of-the-art and guarantees future viability.

A big advantage of the new interface is the new editor – it allows the user to format modules individually. For example, tables can now be inserted and formatted with all the usual elements; there are virtually no limits to the individualization of contracts.

With the new interface, Consor Universal is ready for use on the Internet / Extranet. End customers or brokers can access Consor Universal directly and create certificates for transport insurance or print copies of policies, for example.

Furthermore, Consor Universal version 7.0 is equipped with new collaboration features; this enables and facilitates collaboration in underwriting teams. Meta information such as construction plans, e-mails, business figures, customer presentations and business transactions can be stored in Consor Universal and viewed again later. For example, an underwriter can save the mail traffic with the customer in Universal during the quotation phase. If the contract is extended years later, this important information is still available and can be supplemented if necessary.

A beta version of Consor Universal 7.0 with the new interface will be available from May 2018. Are you interested? Contact us!